The magic of mirroring.. 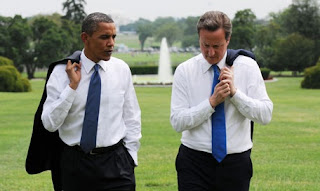 "We like and trust those who seem to be most like us"
A quick glance at the above photo and we can see that President Obama and Prime Minister Cameron look like two little peas in a pod.   They dress the same and walk with their suit jackets slung over their shoulders.   It's not hard to imagine that they have good rapport.
That is what mirroring is all about.   Creating the feeling that you and the person you wish to influence are similar and therefore subconsiously feel you can trust each other.  Matching the behaviors and movements of others creates feelings of liking and strengthens bonds between two people.

Researchers found that when one party was instructed to mirror the other, the two parties reached agreement 67% of the time.   When no one mirroed the other, they reached agreement only a paltry 12% of the time.   Isn't that amazing?
Here are some of the ways to mirror someone...
Voice
Mimic the tone, volume and pace of the other persons voice.  He pauses before speaking and you do likewise.   You may also choose to mimic expressions and vocabulary.
I remember a time when a salesman who had a bad habit of swearing was attempting to sell a client a warehouse.    He had no success and was frustrated that the client didn't appreciate what a great deal it was.    A few days later I ran into his client.  We had a polite conversation and he revealed why he not bought the property.    He didn't like the foul mouthed salesman.  He was a devoutly regligious man and was greatly offended by the salesman.
Body movements
Your client crosses his legs, you cross yours.
He leans forward, you lean forward
He rubs his chin, you rub your chin
You get the idea..
Remember though to pause 2 to 4 seconds before you slowly mimic his movement.  As long as you do this he will never realize what you are doing.
Nodding
This is a very sutle way to draw a person into saying more.  All you do is every once in awhile look into her eyes and give 3 almost invisible nods.   This creates the feeling that you are in agreement and most interested.   I have used this many times on quiet introverted types with great success.   And you don know that your job as a persuader is get them to talk more than you.   Your greatest success will come when you a great listener.
Seek similarities
Find out what you have in common with the person you wish to pesuade.   This could include;   sports, hobbies, activities, humor, entertainment, politics, beliefs etc.   The list could go on endlessly but the more similarity you can find the quicker you can form a bond and build trust.
Powerful Persuasion Phrases
So what you are saying is....    After using the phrase you simply repeat back in your own words what you've just been told.   This makes the other person feel that you are truly listening to them.   They feel like you are on the same page.
I understand or I agree...   Of course you can only say this if you do in fact agree.
How will I know whether mirroring is working?
After mirroring a persons voice and body movements for a few minutes change things up.   If they are leaning back then you lean forward.   If they follow your movement you know that you are in perfect sync with them.  If they don't follow your lead then just keep on mirroring them and try again later.
This is just the bare basics in mirroring.    For instance, you could even mirror their breathing pattern which is also very effective.
Why mirroring works...
Mirroring is something you already do.    If you are with a loved one you will quite naturally mirror and mimic each other.   We all know couples that are so in sync with each other that they can finish each other sentences.   It's naturally to be in sync with family and friends.
"Mirroring its not magic but it can sure feel like it" 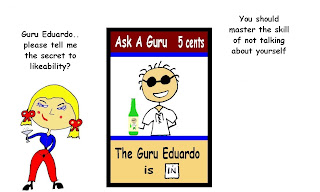