Persistance is over-rated and dangerous! 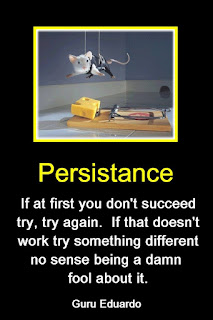 If at first you don't succeed try, try again.   Never ever give up!  Do whatever it takes.   Those are dangerous words and damn poor advice!

I am no fan of persistance!   To me it is over-rated and can even be detrimental to your success and happiness.   Persistance is hard, difficult and not much fun.   This runs contrary to my philosophy of...'life was meant to be fun, easy and abundant'.

First, persistance can keep you doing what isn't working for far too long.   I'm reminded of the TV shows; Shark Tank and Dragon's Den.    Frequently in these shows when participants are trying to get the investors to give them money for their ideas, they are told...why are you relentlessly pursuing this idea that has no merit?   The answer is that they are determined to persist until it works.  Trouble is the  Sharks and Dragons know it just won't.   Peristance then can cause you to pursue an idea or dream that has no chance of success.  Persistance can cause you to be blind to reality.  Even worse persistance has caused many people to go broke needlessly!

Second,   in order to maintain persistance you need willpower.    Willpower is weak power because it can rarely be maintained in the long run.   Willpower is effective for the short run but few can keep it going long enough to achieve success.   Willpower is draining and it is hard and difficult.   There is no fun in willpower.

Third,  persistance kills creativity and flexibility.    Persisting on one course of action can blind you to better opportunities.   Persistance requires a narrowing of vision.   You become like those horses with blinders on.   In the dogged pursuit of your goal, you may fail to realize a much better opportunity is within your grasp. 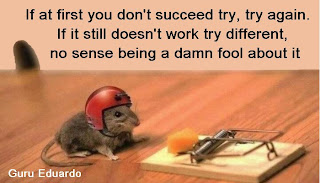 Allright then if persistance doesn't work, what does?   Glad you asked....

Why is committment better than persistance?

First,  committment can flexible and creative.   With committment to an idea or goal you remain entirely flexible as to how to get there.   If a new path opens up and it shows better promise you take it.   If your committment is to being wealthy and the path you are on is not working, your eyes are open to any opportunity that looks superior to you.  If you are committed to a happy marriage you are not locked into one approach.   If something isn't working try something different.

Third,  committment is easier and more productive than persistance.   I recently read a study where students were taking Spanish speaking lessons.   They were divided into 2 groups.   The first group were committed to learning the language.   The second group were not committed but received the exact same hours of instruction and practice.   The researchers were astonished that the committed group scored more than twice as high as the non-committed group.   The implications of this is immense.   Those who have a long term committment achieve and learn double with the same effort.

Committment to a goal or an idea is an act of letting go.   It may be stressful before you make the committment but once you do  you let go of the process and have faith in the final outcome.  So it produces less stress than persistance.   Therefore in my humble opinion....it is no contest between persistance and committment. 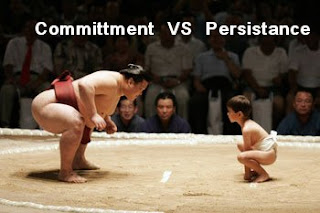 Posted by Guru Eduardo Edward Q McBeth at 9:51 AM