A hundred years ago, it was common in the United States for travelling salesman to cross the country selling cures for all that ails you. And guess what? A lot of their cures worked! Well, at least they worked for a short time.
What few people knew was that some of those magical potions contained cocaine and alcohol. So naturally those who purchased the products got a short term good feeling. This led to their success. Long term? No benefit.
Today, we have a different kind of 'snake oil salesman'. The modern version peddle a pile of self-help products that have now been proven to not work.
One such product is subliminal tapes. Million and millions of tapes have been sold to a gullible public to help you lose weight, quit smoking or to attract incredible wealth. Science has now proven beyond any doubt through countless studies,
they have absolutely no benefit! This is a multi-million dollar industry based on a sham.
There is a short term placebo effect where people claim to feel something. However in terms of concrete results.....nothing! The only thing they do is make money for the producers of this scam.
"If it seems to good to be true....it might be snake oil"
Here is an urban myth that is often used to sell these tapes and other products. You only use 10% of your brain. Again scientific studies prove conclusively this is an impossiblity. If you only used 10% of your brain people would look at us and say, "look at Eduardo he is laying there motionless and not breathing, it's almost like he is dead" Because that is what you would be, dead. Sellers of subliminal tapes often profess that their tapes will help you access the 90% of your brain that you haven't been using.
There is a new branch of phsychology that has been expanding rapidly, it is called Positive Psyhcology and it is examining things like what is it that leads to happiness and success. The good news for us is that we can find out what really works and what is just todays version of snake oil.
"its like springtime in my mind beautiful ideas keep popping up everywhere" 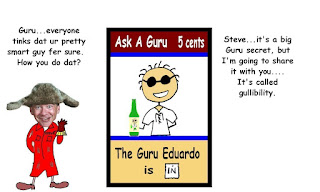