How truthful should you be? 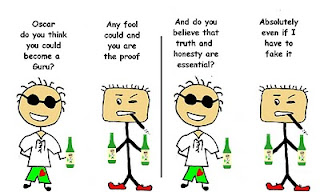 "Half a truth is better than sleeping alone"﻿ (Guru Eduardo)
There is a an old story of a monk who was meditating happily in the sun outside his cave. A beautiful but very distressed damsel came running up to him. "Help me," she cried. "There's a very bad man, a robber, who is trying to kill me. Please let me hide in your cave." Without waiting for a reply the girl ran into his cave and hid in the dark interior.
The monk had not said a word and, although slightly perturbed, he continued to meditate. A few minutes later a wild-looking man with a patch on one eye came galloping up on a black horse. When he saw the monk, he stopped and yelled at him, "Have you seen a young woman? I must find her." Being a celibate, the monk quite calmly said to the robber, "What would I be doing with a woman?" To which the man galloped on.
The monk did not lie, nor did he honestly answer the question. However, by avoiding the truth he saved three lives: the girl's; his own and the robbers. The robber would have had to kill him for being a witness; and the robber would have been killed as punishment.
MORAL....Being too moral is bad for your health
Posted by Guru Eduardo Edward Q McBeth at 6:46 AM