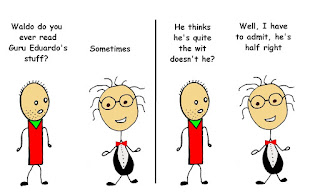 “Success and happiness are inversely proportional to anything that is hard and difficult”
The really good news is: If life hasn’t worked out the way you dreamed, it might be because you just aren’t having enough fun. Isn’t that beautiful? Oh, don’t worry, I can hear that annoying voice in your skull whispering to you…this guy is nuts! Well, that may be true but the paradox is not. By the time you are finished this book I am more than confident you will be a convert to the fun easy way to abundance and happiness. So let’s begin.

“Our mind plays tricks on us all of the time so it’s time to give it some of its own medicine"
When things are going poorly, we feel overwhelmed and this is when the mind starts playing its tricks on us. It starts telling us things like: you are not smart enough or you just aren’t working hard enough. That’s stupid because we both know you are a genius and hard work has nothing to do with success or happiness. (maybe you don’t know that yet but stay tuned).

One of my ‘aha moments’ came when I realized how much effort I will put into sports. After a game of squash, I would come off the court drenched with sweat, physically drained and yet on a high. I thought to myself, wow it’s amazing how hard I just played. I get incredible fitness out of the game and I love it. Now, if you put me in an aerobics class or on a stationary bike, I know I would not keep at it anywhere long enough to get the same benefit. I just don’t have that kind of willpower (nor do I want to). But make it a game and I will expend incredible effort. So being the bright and lazy guy that I am I reasoned that if everything was a game or just plain fun, then logically anything would be easier and thus possible. 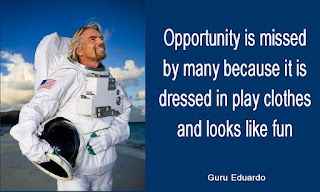 While writing this chapter I got to thinking about the great inventions of mankind. It occurred to me that many inventions came about because someone was trying to make work easier or attempting to avoid it. So I guess you could say the lazy guy has great potential to change the world.


Then there are people like Steve Jobs and his buddy Woz who were so busy playing with computers in his dad’s garage that they ended up creating Apple computers and becoming billionaires. And how about that guy Zuckerman, he was just trying to score with the college girls when he invented Facebook. These guys played their way to fantastic success.

Just because I say so doesn’t mean it’s true! You’ve probably been habituated to the mantra… life is hard and difficult and then you die. I expect to have a challenge proving to you that you can live life like play. But a challenge is nothing more than a game and I really like to play. So let the fun begin…


“Life must be lived as play”  (Socrates)

I may be a nut but I’m not the only one! And it isn’t just Socrates that shares my point of view. Here’s what another great philosopher Heraclitus had to say….“Man is most nearly himself when he achieves the seriousness of a child at play.” Yeah, it’s true, those guys were hanging around this planet a couple of thousand years ago, but the billionaire Richard Branson says…“We won’t take on any venture unless we can have fun doing it.” So if it’s good enough for philosophers and billionaires it’s good enough for me.

“You can only be profoundly absorbed in doing what you love”

That’s going to be demonstrated to you in this book. I love my philosophy that….life was meant to be fun, easy and abundant. So I’m going to have a blast convincing you with the kind of book you’ve never encountered before. You see I learned awhile back that you can’t bore anyone into wanting to learn. And if I had to write the typical boring philosophy book it would never have gotten done. I wanted to have fun writing it and guess what? I did.

Fun is not a trivial matter it is the most important thing in the universe. Later you’ll learn that energy flows to fun and fun is the path of least resistance. Once you understand the power of fun you will realize it’s a lot like when you were in elementary school. The difference here is recess goes all day long with 15 minute work breaks.

In keeping with my philosophy that things are better if you can have fun doing it I promise a fun easy read but with a HUGE return on insights. Then perhaps one day you will become a goofy guru like me and together we can start a new movement and make the world a better and happier place.


Pssst…I will confess, there is no denying that hard work has gotten lots of warrior types great success and wealth. My point is that hard work is just a one way path and it sure as heck isn’t the fun one. 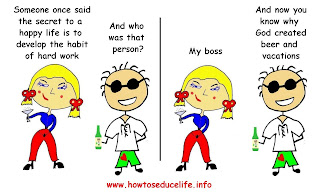 Posted by Guru Eduardo Edward Q McBeth at 9:59 AM