Don't be so quick to dismiss this..

We all read and heard about different ideas and decided instantly whether we had any interest in it or not. What I'm thinking about is when we dismiss an idea or a thought that might acually have  been good for us.

It was interesting to me that the one's that I thought that would benefit from it the most were the one's I know would be least interested in watching, reading or even talking about it. It's much the same when you go to a seminar. You look around and see who is there and who is not? Yep, those that need it aren't there, and those who are already on the right path are there.

By contrast those that I felt needed it the least were the one's who jumped right on something that sounded interesting to them. They saw the immediate benefit not just for them but for others. This has me thinking about what I might have dismissed in my life that could have had major benefit to me? Now obviously its healthy to dismiss some things like recreational drugs for instance. But perhaps we would all benefit if we were just a little more open minded and were not so quick to dismiss what we don't initially understand.

Here is the thought...what if we're wrong? Just contemplate for a moment all the good things you missed because you thought you had all the answers?

"keep away from people who belittle your ambitions.
Small people always do that but the great one's
make you feel that you too, can become great" 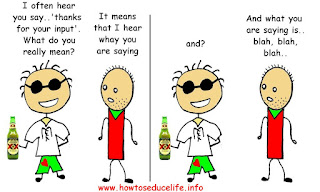 Posted by Guru Eduardo Edward Q McBeth at 7:46 AM