Why the obvious is obviously wrong 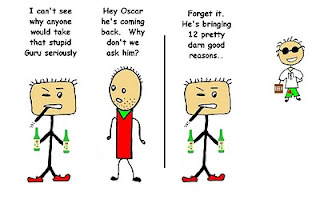 The two greatest scientific breakthroughs of all time are considered by many to be Eintstein's theory of relativity and the discovery of DNA by James Watson and Francis Crick. I had the good fortune to be watching PBS one night and saw a fascinating interview with James Watson. What he said blew me away...

The interviewer Bill Mohr introduced James Watson as one of the worlds great genius's of our time. Watson stopped him and refuted that statement. He said, I have an IQ of 125 which I'm told is the same as the past President, George Bush. Now he really had my attention, I mean really...the same IQ as George Bush? He went on to explain that it wasn't the number of brain cells in his skull that led to the great discover.

He attributed it to an insatiable curiosity. He was just plain in a hurry to find answers. He breathed it, loved it and couldn't stop thinking about DNA. He ended by saying words something like this...

To becom a genius it's best to let someone else do the heavy lifting. There is no need to reinvent the wheel, just improve it.

Hard work is paid for in wages. Wages never made anyone a billionaire. If you are to have any hope of becoming a billionaire you need to find a passion. Doing what you are passionate about is not hard work, it's fun. So let me rewrite Edison's quote above...

(excerpt from my book ...How To Seduce Life
Posted by Guru Eduardo Edward Q McBeth at 6:29 AM