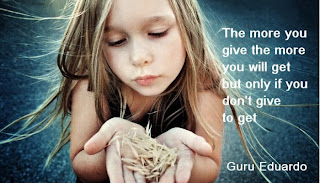 That has been my personal mantra for some time but I recently saw it work for a small company.   My son thought he heard a strange noise from his car's transmission.   I've heard so many strories of untrustworthy shops that I decided to ask around for a recommendation as to where we should take the card to have it checked.

A friend highly recommended a local shop called Excell Transmission.   So we took his car there.   The owner called us back and said his mechanic could find absolutely nothing wrong with it.   He then told me he would take for a highway test drive himself so as to be certain.

Later he phoned back to confirm that there was nothing to be concerned about.  The transmission was indeed in good repair.  When I went to pay the bill he told me there was no charge.   I was surprised since both the owner and his mechanic took their time to check the vehicle out.

Since then I've retold this little story of great service to numerous people.   This morning a friend told me that he had sent one his friends to that shop to get some work done based on my experience.   I predict a bright future for that business!

So the owners free service resulted in more business...the more you give the more you get as long as you don't give to get!   Beautiful... 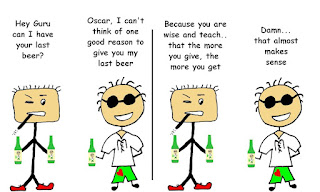 Posted by Guru Eduardo Edward Q McBeth at 10:35 AM