Are you normal? For your sake I hope not 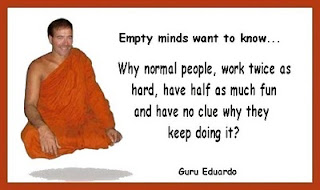 "what seperates the life seducers from the others, is that they chose to be constantly curious instead of deliberately dumb"

It's no coincidence that smart people read books and the stupid one's refuse to.   An open and curious mind seeks new truths by reading and contemplation, a closed mind uses television as their prime information source.   I know by virtue of the fact that you are reading this that you are the curious type.  So you won't be offended by my musings.

Some of those who are considered to be a genius don't have an exceptionally high IQ.  What they do have is an exceptionally high curiosity.   They are the constantly curious, always on the look for a better answer.  They are the one's who are having the fun in life's journey.   Every little discovery is a joyous moment.   The more they learn the happier they become.   And then their is the lethat combination..

"it is truly amazing how much damage you can do to yourself and others, if you these two qualities...stupidity and enthusiasm"

When I meet one of these folks, they frustrate me so much, I just want to bonk them on the head.  They are the 'know it alls'.  While us seducers are always wondering what is the truth, the deliberately dumb crowd are so damn cocksure of themselves.   They are the one's that belive in all sorts of kooky stuff.   They stand by their beliefs and will fight to the death to defend something they have little or no knowledge of.   Hint....they love reality shows!

Of course they don't recognize themselves.   When you recognize a deliberately dumb person...never ever get in an arguement with them.   I have made this mistake many times.   You can't win with all the logic in the world.   If you start making sense, their defence is to talk louder and try and shout you down.  It's a no win situation...better to nod your head in fake agreement and try and change the topic.

"as a life seducer, our job is to understand why people are deliberately dumb"

It took me awhile to figure this one out.   I have over time come to realize that choosing to be dumb is born from insecurity.   In their minds, they don't want to risk examining new beliefs or opinions for fear that they will look dumb.  If they did that, they know that at least initially they would be one with the least information on the topic.   And how can you appear smart if you have the least knowledge on the subject.  So they defend a belief or opinion to the death, in the thought that their confidence shows how smart they are.   Their refusal to contemplate another persons ideas is because want to convey, that they know something and you don't!  Silly but true.

So I've given up on the deliberately dumb.   Let them have their little world while I'm happy in mine!  The funny thing is that they greatly out number us.   They are the vast majority in society and we seducers are the exception.  Therefore, it could be said that dumb is normal.  Sorry, didn't mean to scare you like that.

This little rant is now over and I return you to your regular positive programming.   And celebrate that your programming doesn't just come from just the idiot box.  And friends try to remember...

PSST...if you like this, do me a favor and hit the F button below and share it with your facebook friends.   Don't worry about offending the dumb crowd, I promise you, they won't recognize  themselves anyway.   Thanks
Posted by Guru Eduardo Edward Q McBeth at 8:20 AM