The awesome power of 'because' 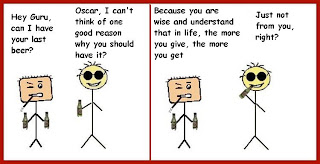 Getting others to want to do something for you is a fun challenge.  A good secucer or seductress, has mastered many techniques.   The proper usage of the word 'because', is one of them.   Getting another person to want to comply with your wishes, is more likely to meet with success, if you explain why they should.

"the first rule of seduction, it to make the other person feel good about themselves"

No one likes to be told what to do (especially me).   From the time when we were small kids, we grew a great dislike for the power others had over us.  We built up resistance to authority.   It makes us feel powerless.   So we much prefer to be asked and be given reasons to justify the request.   A request followed by a reason greatly increases our willingness to comply.

"want to really annoy someone, tell them the reason is...because I told you so"

Just reading those words takes me back to my rebellious youth.   Because I told you so, is not a reason, it is a demonstration of power over me.   Thinking about that makes we want to break the speed limit or dye my hair purple....just because.

"our authomatic responses were developed over the years, based on reason, or at least the appearance of reason"

Using the word because, followed any kind of reasonable explanation, triggers in us an automatic obligation to comply.  We lose the powerless feeling, because we feel the other persons need to justify the request.   This empowers us and greatly increases the chances that we will comply.

So when some sweet thing says...Eduardo could you do me a favour and buy me a margarita, because I'm feeling lonely and vulnerable...her chances of me complying with her wish, just went through the roof.  But let's keep that our little secret.   Now go out there and have some fun with this useful knowledge.   And don't do it because I told you so.
Posted by Guru Eduardo Edward Q McBeth at 8:56 AM