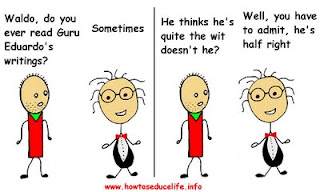 Admit it, you've tried hard and difficult and how's that worked for you so far?   Hmmm, just as I suspected.   All that old 'nose to the grindstone' got you was a flat face and a disappointing life.   Me too, until I discovered this paradox...

The really good news is;  If life hasn't worked out the way you dreamed it would it could be because you just aren't having enough fun.   Isn't that beautiful?   Oh, don't worry, I can hear that annoying voice in your head whispering to you....this guy is nuts!  Well that may be true but the paradox is not.

When things go poorly we feel overwhelmed.    This is when the mind starts playing tricks on you.   It starts telling you things like:   you are not smart enough or you just aren't working hard enough.  That's stupid because we both know you are a genius and hard work has nothing to do with success or happiness  (maybe you don't know that yet but keep reading).

One of my aha moments came when I realized how much effort I will put into games.   After a game of squash I came off the court drenched with sweat, physically drained and yet on a high.   I thought to myself...wow its amazing how hard I will play.  I get incredible fitness through play and I love it.   So being the bright and lazy guy that I am, I reasoned that if everything was a game or just plain fun then logically anything would be easier and thus possible.

Hard work is good for those who want to make a modest living.   So if that's all you want go back to work and forget about this book.   Now for those who want to do something truly exceptional, you need to start having more fun.   Fun at work, fun at home, fun in your relationships and even fun in your spiritual life.   Remember the wisdom of the bumper sticker that says...

"If work was that good for you, they wouldn't have to pay you to do it"

While writing this chapter I got thinking about the great inventions of mankind.   It occurred to me that many inventions came about because someone was trying to work easier or just to plain avoid it.   So I guess we could say that the lazy guy has great potential to change the world.

When it's something you have to do for a wage, it's called work.   When it's something you do because you love it, it's called play.  And getting paid to play is about the sweetest concept mankind has ever invented.  Just because I say so doesn't make it true.   Like others you've probably been habituated to the mantra...Life is hard and difficult and then you die.  So I expect to have a challenge proving to you that you can live life like play.   But a challenge is nothing more than a game and I really like to play.   So let the fun begin...

Pssst....If you like this why not help me spread the word.   Just hit the f button below and it will automagically share it with your facebook friends.
Posted by Guru Eduardo Edward Q McBeth at 9:09 AM