How to attract wealth 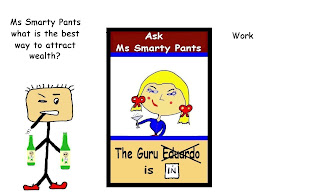 While writing this chapter I got to thinking abou the great inventions of mankind.  It occurred to me that many inventions came about because someone was trying to make work easier or just plain avoid it.   So I suppose you could say the lazy guy had great potential to change the world.

Then there are people like Steven Jobs and his buddy Woz.   They were so buzy playing with computers in his dads gargage they ended up creating Apple Computers and becoming billionaires.  And how about that kid Zuckerberg?   He was just trying to score with the college girls when he invented Facebook.   These guys played their way to fantastic success.

When its something you have to do for a wage its called work.   When its something you love to do its play.   And getting paid to  play is about the sweetest concept man ever invented.   One requires work and the other effort.  Same thing only radically different (in a really good way).
Posted by Guru Eduardo Edward Q McBeth at 7:41 AM