The best seduction skill to have? 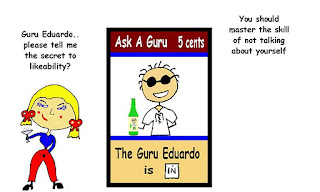 Odds are you are going to be a flop in the game of life, if you don’t master this skill! If you want to have any hope in seducing life, this it. The good thing is that you can master it (if you haven’t already). Yes, of course I am talking about likeability.

“if you weren’t born beautiful and talented, life will still be kind to you, if you are highly likeable”

Being likeable having an unfair advantage over others. The likeable, tend to get the best jobs, have more friends and better relationships. And this doesn’t even scratch the surface of the benefits.

You might be convinced through logic and persuasion to do someone’s bidding but never will you be seduced if you don’t find them at likeable. Let me give you an example of the importance of being likeable. Awhile back, I read of a study that was done to determine the likeability of the U.S. Presidents. In every case since the advent of television, the candidate who was deemed by the public to be the most likeable person (by the public) won each election. How is that for powerful…

Need more convincing? Here are some more benefits that the likeable people get:

*They inspire others to give more

* They get better service and better deals from businesses.

“you don’t have to be likeable to succeed anymore than you have to be smart, but unless you have something against having an advantage, it sure helps”

There will always be the foolish few, who actually prefer to go it alone. Their attitude is…I don’t need other people to make it. I admire a person with principles but that is a dumb one. If others want to help me and make my life easier and more fun, I say welcome aboard friend.

“likeable people are happier than others, a coincidence…I think not”
Posted by Guru Eduardo Edward Q McBeth at 10:20 AM