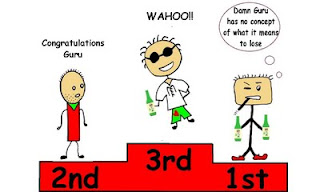 "life is too much fun not to make more mistakes"

It often occurs to me that we do a lot of damage by labeling people and our actions as losers.   Just because something or someone fails doesn't mean it is bad.   It is only through mistakes and failures that we really learn.   We only win by trying and no one wins all of the time.   So I'm thinking we should encourage failure.  Fail early, fail often equals learn early and learn often.  The only time it hurts us pernamently is when we don't learn from the mistake.

I wrote that line some months ago but it still cracks me up.   We've all been dumb animals at times.   Man is the only animal that continually beats himself up over a mistake.   An animal in the wild if it makes a mistake either pays for it with it's life or learns a valuable survival lesson.   In the animal world you either learn or you die.   Good thing for us we get many chances we screw up.   Good thing for us we can learn the lesson from a mistake and profit from our bad judgement.

"challenge yourself to the point of failure"

That's exactly what athletes and the very best entrepeneurs do.   They push themsleves and their companies until something fails.   That's the only way they can know what is possible and what isn't.  So then failure reveals the truth they need to know.   Then it longer is try, try again.  It then becomes..try different.   Or as WC Fields once said...

"try, try again and if it still doesn't work..quit.   No sense be a damn fool about it"


Pssst.....if you like this or just want to annoy your facebook friends why not hit the f button below?
Posted by Guru Eduardo Edward Q McBeth at 9:18 AM