You need this super power 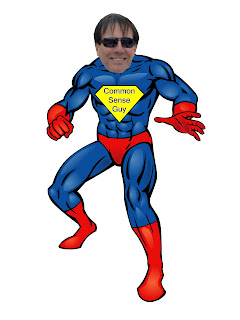 "Common sense is so rare it should be considered a super power"
Before you write this off as another of my wacko ideas consider the abilties of my new super hero...Common Sense Guy.   I hope you weren't under any delusions that common sense is common?
So here are some his special powers...
1.  Able to go undected to the general population for extremely long periods of time.
2.  Able to see through the bull crap of politicians, greedy corporate guys, narcissists, snake oil salesman (sometimes disguised as motivational and success money grabbers)  and delusional fanatic religous types.   Hell he can see through anyone's phoney baloney for that matter.
3.  Has the ability to think and act independantly.  To go agains the flow with ease.
4.  Is not constrained by fashions, fads or silly rules.
5.  Is not considered normal and doesn't give a damn.
I'm sure with your help we can come up with more special powers for 'Common Sense Guy'.   Ok, just to be clear there is also 'Common Sense Gal'  (this is where I really had to bite my tounque and not insert a joke lest Common Sense Guy lose his powers).
So then this got me thinking of what would be Common Sense Guy's kryptonite?   Well that's easy...
Sex
Alcohol
Drugs
Power
Fame
Greed
I'm sure there is more kryptonite but its easy to see why common sense is so rare.  There are so many factors working against it?    And as if that wasn't enough arch enemies out to destroy 'Common Sense Guy or Gal, there is the most deadly of enemies?   Oh yeah this enemey makes the others look like Boy Scouts or Girl Guides.
This enemy of common sense is so lethal because you never see him coming until its usually too late.   His victims even after he takes over their lives still don't even know of his presence.   Once he has taken over few survive.    Like a narcotic he makes his victims feel so good they feel omnipotent.  Why I've seen good sane likeable people turn into blathering idiots  under his influence.
Any guesses?
Ok, I won't keep you in suspence any longer....his name is...
Self Delusion
Did you happen to see what he did to Charlie Sheen and Lindsay Lohan?   How about James Arthur Ray?   And he really did a number on all of those Middle East dictators.   It's impossible to debate the power of the evil one...Self Delusion?
We've all at some time wondered why common sense is so rare.    As that radio guy used to say....and now you know the rest of the story! 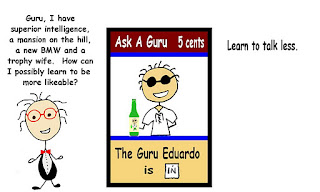 Psssst.....just in case you might have thought you saw some resemblence between me and our hero 'Common Sense Guy'....well as my friends will tell you....that would make no sense and be downright silly!﻿
Posted by Guru Eduardo Edward Q McBeth at 1:06 PM