Are you in on the joke?

Did you ever get the feeling that this life is just one big joke, being played out at your expense?

Some things just don't seem to make sense. Here is a short list, that I've been contemplating...

*The best way to conquer your enemies....is to love them.
*To find God....stop looking.
*To gain wisdom....stop thinking.
*To feel wealthy....give it away.
*To gain more influence....place other people's interests first.

At times life just doesn't seem logical and maybe that's why so many people struggle. But what if it's all just a big joke? What if there is a God (or Goddess, women like to have fun too) and he or she gets together with their amigos to have some fun with us little people down here?

Now things would start to make sense to me! For instance...some years ago, I was listening to a speaker promoting his memory course. He demonstrated his craft by memorizing the names of every person in the room (there were about 50 of us) plus some details about each of us. And this was just for starters, the guy was amazing, he had all kinds of memory tricks....I was impressed!

So I plunked down my 100 bucks. After all as my friends know I tend to have a suspect memory. If I get really involved in something I can forget seemingly small details like  picking up my son after school.

Anyway, I was conjuring up in my mind all the benefits and how I would impress my friends with my new  display of memory skills. They were going to impressed next week after I graduated from the course. There was only one problem....I forgot to go!

This little story has entertained many over the years and always at my embarassing expense. I can't begin to count how times I've heard lines from so called friends like; how many times did he resell the same course to you? A cosmic joke? I think so.

It's things like this that have led me to believe that life is not meant to be taken so serious. If it's one big cosmic joke then I want to be in on it. And if my head is full of hot air as many have long suspected...so what? When my life on this planet is done, the least they will say of me is...the fool sure had a good time!

Smile, and people will think you are in on the joke! 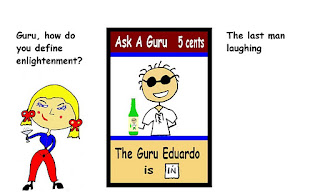