Do we get the God we deserve? 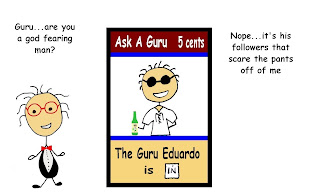 Some recent research has shown that the type of God you believe in has an impact on the quality of your life.   For instance, if you believe in a kind benovalent God, you will worry less and handle stress better.  And as an added bonus you are more likely to live longer and happier.  If you believe a God who punishes you for your sins (and who doesn't sin) then you will be more anxious and stressed in life.   The more fundamentalist types as we know are more likely to blow up innocents and themselves.   They are more apt to believe in guns for everyone and harsher treatment for those who break the law.

And what if you believe in no God?

Buddists seem to be just as charmed as those who believe in the kind benovlant and forgiveing God.  A lot of that is attributed to a gentle life philosophy and meditation.

That's too hard to measure since the personal philosophy of an athiest can be all over the map from kind to mean, from generous to miserly.   You get the picture.

Truth is most people don't chose their religion they inherit it.    Overwhelmingly most people take up the religion of their parents.   They may and often do believe whole heartedly in their faith but it is hardly chosen.   Most would admit they never ever entertained any other possibilities?   They were so indoctriated as youths that the thought of openly examining another belief would seem sacriligous.

It seems to me that whatever you believe in it's best if it is based more on love and less on punishment!   If you want to live a long happy life then it seems to me that this is something worth thinking about?

On the other hand if your God is working for you beautifully....

And now since you've been so tolerant of my ramblings, I leave you with this story...

The Atheist, A Bear And God

An atheist was walking through the woods, admiring all that the
"accidents" that evolution had created.

"What majestic trees! What powerful rivers! What beautiful animals!" he
said to himself.

As he was walking alongside the river he heard a rustling in the bushes
behind him. Turning to look, he saw a 7-foot grizzly bear charge towards
him.

He ran as fast as he could up the path. He looked over his shoulder
and saw the grizzly was closing.

Somehow, he ran even faster, so scared that tears came to his eyes. He
looked again and the bear was even closer.

His heart was pounding and he tried to run faster. He tripped and fell
to the ground. He rolled over to pick himself up but the bear was right
over him, reaching for him with its left paw and raising its right paw
strike him.

At that instant the atheist cried, "Oh my God...!"

Time stopped. The bear froze. The forest was silent.
Even the river stopped moving.

As a bright light shone upon the man, a voice came out of the sky,
"You deny my existence for all these years, teach others that I don't exist
and even credit creation to a cosmic accident. Do you expect me to help
you out of this predicament? Am I to count you as a believer?"

The atheist looked directly into the light, "It would be hypocritical to
ask to be religious after all these years, but perhaps you could make
the bear religious?"

The light went out. The river ran. The sounds of the forest resumed.

..and then the bear dropped his right paw, brought both paws together
and bowed its head and spoke: "Lord, for this food which I am about to
receive, I am truly thankful..."
Posted by Guru Eduardo Edward Q McBeth at 5:59 AM